Root cause of illegal child labor and modern slavery
Cocoa farmers in Ghana and Ivory Coast are trapped in extreme poverty because of the unequally divided chocolate supply chain. The current industry model – built on profit maximization and anonymity – results in a large group of farmers that have no choice then to work for far less than the absolute poverty line. The structural loss at the beginning of the supply chain leads to child labor, structural exploitation and even forced labor. Right now, 1.56 million children work on cocoa farms under illegal and often dangerous conditions and a minimum of 30.000 children and adults are victim of modern slavery in Ghana and Ivory Coast. This is unacceptable. Chocolate companies have the power and responsibility to solve this system-enabled poverty and end modern slavery and illegal child labor in their own industry. These farmers and their families have a right to a fair share of all money earned within the cocoa chain. We need an equally divided, transparent supply chain with direct relations.

A new industry norm
Tony's Open Chain doesn't believe in 'charity’ as in ‘compensating for a harmful business model’. Rather, it is set up to structurally change the industry with chocolate companies themselves in the driver’s seat. In Tony’s Open Chain, the new way of doing business is captured in the 5 Sourcing Principles. The 5 Sourcing Principles are an integrated approach to end structural poverty at the beginning of the supply chain and with that end the need for child labor and forced labor to make ends meet.

Tony’s Chocolonely started working according the 5 Sourcing Principles to lead by example and inspire others to act. To show that making chocolate can be done differently. But, Tony’s Chocolonely working with 5.000 farmers and sourcing 7.000 metric tons of cocoa beans is not a sufficient volume to create the system change needed. Other chocolate companies joining Tony’s Open Chain as Allies and adopting the 5 Sourcing Principles will, however. And when the other key players – governments, retailers, consumers and farmers - also take their responsibility and use their power in their own domain, the change will be structural and sustainable.

That's why Tony's wants to create a movement.

Take responsibility
Until this new way of doing business is the norm, Tony’s and Allies in Tony's Open Chain take their responsibility and encourage other chocolate makers to do the same. One of the 5 Sourcing Principles is paying a higher price via an additional premium (higher than the certification premium) on top of the basic cocoa price, so that a living income is made achievable for cocoa farmers.

Open and transparent chain
Without transparency, which starts with traceability and direct relations, it's impossible to feel responsible and take action for issues in your supply chain. Knowing who you are doing business with and under which conditions work is done are preconditions. No chocolate company on its own is to blame for the current built-in system errors, but each and every chocolate company is responsible to change it: starting with their own supply chain. By working together, Allies in Tony's Open Chain have the power to replace the current harmful model with a new model based on respect and equality: the 5 Sourcing Principles. Needless to say, traceability and direct relations are two of the 5 Sourcing Principles.

Living income for farmer households
Nevertheless, right now, the price of cocoa is too low. Consequently, a West African cocoa farmer isn’t able to earn a living income. Together with their families they live in extreme poverty. So, one of the responsibilities is to make sure cocoa farmers can earn a living income. That’s the net income for a household, sufficient to provide every member of an average household with a respectable standard of living. Tony’s has developed the living income model model for this purpose: 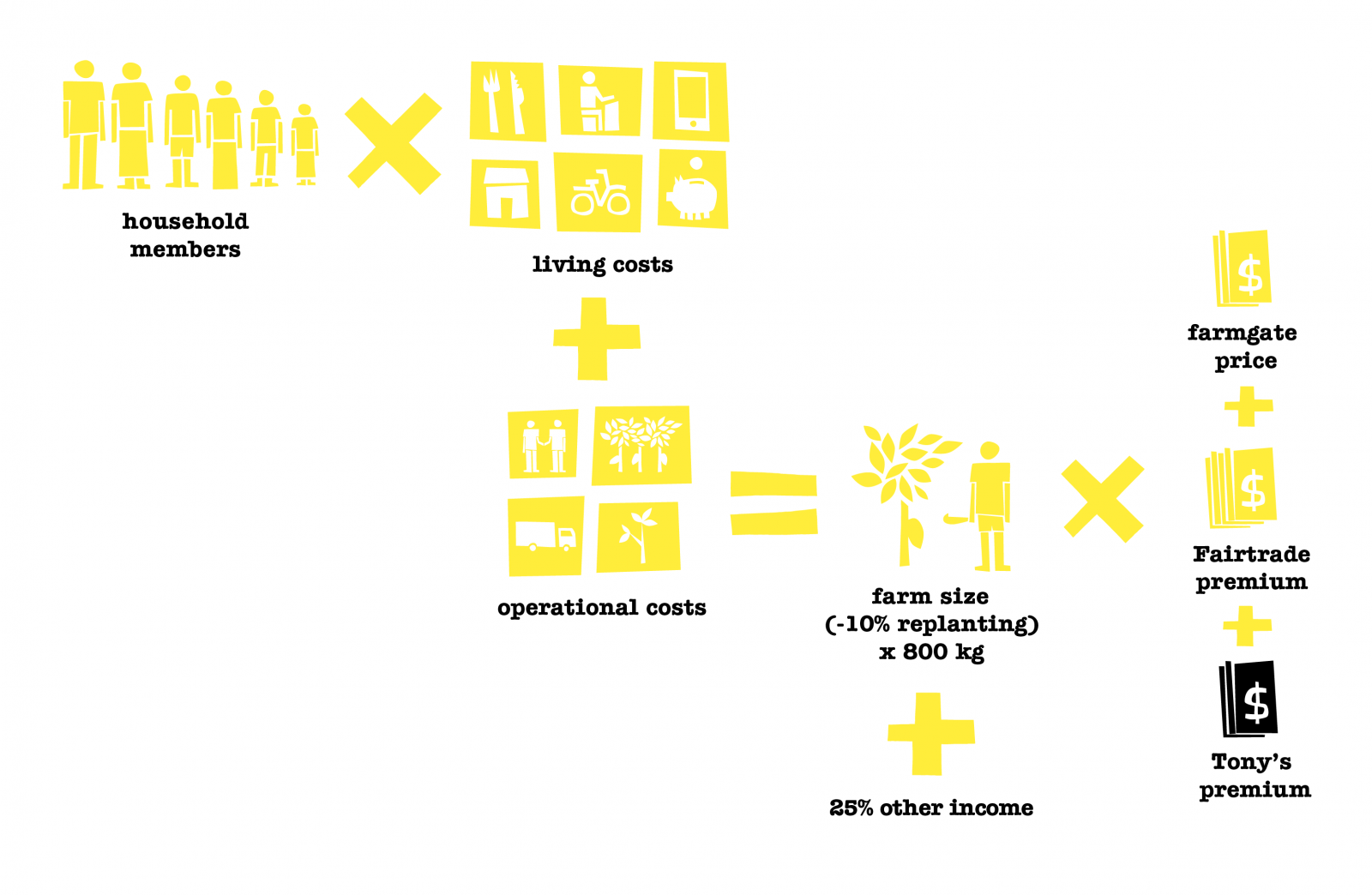 The living income model is based on the following independent sources.

*In the current calculation, references and averages used will change when more accurate information becomes available. F.e. more and more GPS-mapping is ongoing and will allow for a better average farm size.

With more attention for a living income in the industry, this year Tony's Chocolonely combines forces and insights together with partners, to come up with 1 methodology and figure for a living income for the entire cocoa industry. This is achievable, because here too applies "only together we make 100% slave free the norm in chocolate". Until there is a structural solution for the excessively low cocoa prices, the gap needs to be filled between a living income and the price that a farmer gets for his beans with a premium.

Join Tony's Open Chain!
Tony’s Open Chain is scalable and open for other chocolate companies to join. But be aware. Allies become the proud co-owner of a problem created by the system they conduct business in. And system changes are never plug and play. Tony's made the approach, so it can be changed. It is a mission possible, but it takes courage, vision and perseverance to get there. If you are ready to put some muscle into it, Tony's is ready to tell you all about their approach. You, as a chocolate company or retailer, can implement the 5 Sourcing Principles too and join the movement!